The second in a series about those who change the world through the way they lead. In this blog I focus on one of the six characteristics of those make a difference in the world – being self-aware.

Mark McKergow’s warm smile fills the screen as the vivacious physicist-turned-leadership consultant talks about his work with the Sunday Assembly movement. Mark describes the Sunday Assembly as a Godless church – a place where people can gather and have the advantages of being part of a community without religion.

He became involved with the Sunday Assembly movement when he attended the first gathering in 2013 in London. He has been a volunteer ever since and is now part of the Edinburgh Sunday Assembly. He says people want the community that a church-type structure can provide, to do good, play their part in society and be a good person, but they don’t want to do it with a religious badge on. He plays the saxaphone at the Edinburgh Sunday Assembly gatherings and warmly welcomes people to the secular gathering. Mark says ‘You never know who is going to come and we normally manage to make something useful happen.’ The Sunday Assemblies motto is: live better, help often, wonder more – a motto that aligns with Mark’s thinking.

When he is not leading with the Sunday Assemblies, he is working as a leadership consultant, where he specialises in host leadership – a concept he developed – based on how those who make good hosts also make good leaders.

Hosting is in Mark’s blood with his father and grandfather serving as church wardens. He found that those who are good hosts, have a secure sense of themselves, which allows them to meet a stranger and welcome them. He says you cannot open yourself to others, if you don’t know who you are and what’s important to you.

When working with leaders, he runs a little exercise; ‘It’s Saturday night, you’re having your dinner, it’s lashing down with rain outside, the thunder is going off. The doorbell goes and it’s a bedraggled stranger, saying they have nowhere to go, can you help? Are you going to invite them in or are you going to call the police?

‘The people who will invite them in are the ones who have this sense of ‘I am in control of this space, such that I am able to welcome somebody in.’
He says that people with big egos struggle to put their guests first. They can pretend to be the host, but it’s all about them, really. But the good host will make sure it’s all about the guests.

His leadership philosophy is, like a good host, to remain open to whatever arises, to take life one step at a time and to work with ‘the grain of the universe’.

When listening to Mark’s story about how he leads, it is clear that he practices what he preaches. He embodies the idea of looking at his own behaviour and how it impacts others. He is one example of a person who is displaying one of the six characteristics of leading with humanity, that are clear from my research – see the first blog post. If you’re interested in learning how you can develop these skills and attitudes in yourself, then please book a call to find out more about the Leading with Humanity development programmes. 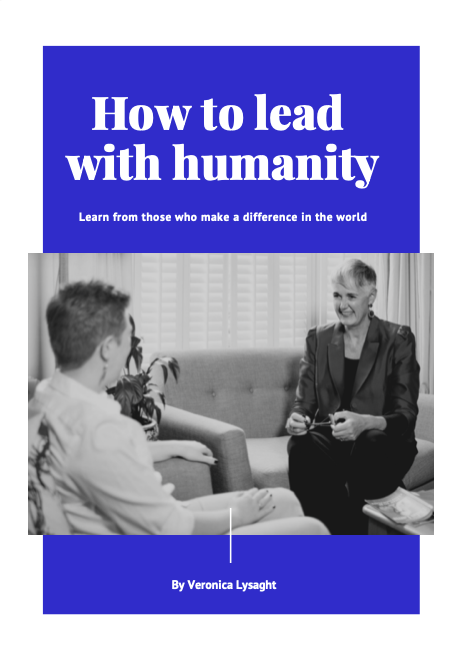